Soil and landscape degradation, deterioration of population’s health and living conditions, violations over the rights of indigenous people – those are the devastating effects of coal mining in Russia’s Kuzbass discovered in The Cost of Coal report presented by Russian environmental group Ecodefense in Paris. 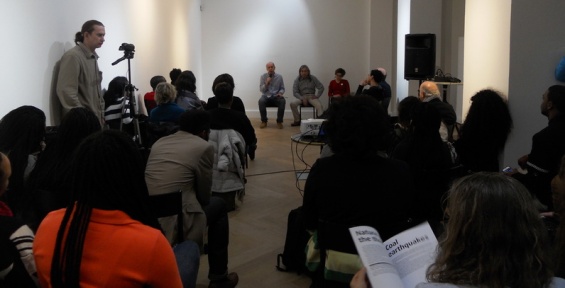 The UN climate negotiators gathered in Le Bourget suburb of Paris are to decide whether coal will stay underground or mining and burning of the dirtiest fuel will continue to destructively affect the environment, people’s lives and the climate of the planet. Environmental organizations and indigenous people use this occasion to draw attention to environmental and social problems that are brought by coal mining to the regions, in particular Kuznetsky coal basin in Siberia where 80% of population live on coal or within the mining affected zones.

“The only way to influence Russian coal companies is international solidarity and cooperation, – co-chairman of Ecodefense Vladimir Slivyak stressed at the report presentation. – It would be impossible to make them start dealing with negative consequences of their operations without pressure from the West, since the West is the place where they sell their coal to. The situation may change only if the western countries start asking Russian coal companies what they do to meet environmental standards or to respect indigenous people’s rights, etc.”

Kuzbass is the largest coal mining area in Russia. Nearly 60% of all Russian coal is mined there. Kuzbass coal makes up 76% of Russian coal export. And both mining and export are growing and planned to grow further. Coal production rate have grown in comparison to the ones of Soviet times. Local people and nature are the ones who pay high price for this growth. By a range of indicators, Kemerovo Oblast is among the most environmentally unfavorable regions in Russia.

Kuzbass air is contaminated with carbon oxide, nitrogen dioxide and coal dust resulting into continuous intoxication of the residents. The Kuzbass rivers, according to the official data, belong to the category of contaminated water bodies as concentrations of oil products, phenols, nitrogen, ammonia, iron, manganese, and copper in the rivers are several times above the allowed levels. 93.8% of drinking water sources in Kuzbass don’t meet the sanitary chemical and microbiological standards. A characteristic for Kuzbass phenomenon that visualizes the level of air pollution is black snow fallout.  According to the official report, Kuzbass snow contains sulphur compounds, nitrites, nitrates, chlorides, and potassium.

Unfavorable living conditions in the region affect health of their population. The average life interval of Kuzbass residents is several years shorter that the Russia’s average. Kemerovo Oblast is leading in child cerebral palsy among the Russian regions. Tuberculosis rate is 1.7 time above Russia’s average. Child mental disorder rate is 1.8 time higher, and child mental deficiency is 2.4 times higher in the region that the average in Russia. Female reproductive system anomaly rate is 3.3 times higher than the average in Russia. Kuzbass is the only region in Siberia where child infectious and parasitic diseases incidence is 2 to 3 times above Russia’s average.

“According to official data, only 3 out of 100 people in Kemerovo Oblast have satisfactory living conditions. Moreover, Kemerovo Oblast has the highest professional diseases rate which has increased by 5% over the last two years. And in two last years, this indicator has grown by almost 5%,” the report titled “The Cost of Coal: Impact of Russian coal mining on the environment, local communities and indigenous people” says.

Kemerovo Oblast rates second only to Moscow Oblast in share of land disturbed and taken out of productive cycle; arable lands are destroyed by open-cut mine exploration. According to the experts, disturbed land is estimated to make up about 20% of the populated area in Kuzbass. Meanwhile, coal companies are not interested in spending money for land restoration but preferring to claim in the project documentation that the nature will restore itself when mines are worked-out.

For the indigenous people of Kuzbass, the Shor people, it causes the loss of native lands, trades and lifestyle. Open-cut mining, the technology applied for 7-80% of coal mining sector in Kuzbass, turns natural landscape into moon-like surface, leads to destruction of forest and extinction of fur animals and fish, attacks the Shor villages.

This way, the Shor village of Kazas was actually wiped off the face of the earth. Most of the residents were forced to sell their houses to the Yuzhnaya Coal Company (part of “Sibuglemet” company) and leave, and houses of those a few active protesters were set on fire. Stories told by the residents of this and other Kuzbass villages are enclosed to the report.

The villagers, unsuccessfully beating down doors of municipalities, prosecutor’s offices, police, courts and other instances, have been for years in an unequal fight with coal companies that run their excavation and explosion operations right in several hundred meters from their houses. The local authorities are dependent from coal mining industry and ignore the damage to the environment and violation to the people’s rights caused by coal mining in the region. According to Aleksandr Arbachakov, a representative of the Shor people at the presentation of the report, the local authorities understand protection of the indigenous people’s rights as the development of their traditional songs, dances and museums, but became deaf when it comes to the rights of indigenous people for their native land.

“We want our voice to be heard here, in Paris, first of all by the politicians and the governments, we want them to think about our rights. We are going to survive, we are going to protect our rights and we hope that such meetings will help us”, Arbachakov said.